If you've played NHL'94 enough, you know that the game is full of bugs and glitches that occasionally happen. Everything listed below has happened to us while playing the game. I will continue to get some video clips of these bugs so you can see what we're talking about. It seems Buffalo is a good team to experience some of the more rare bugs in the game. Here is the list of bugs we've seen so far in the game:

This is typical of many games, but we have to include this because NHL'94 does freeze from time to time. Usually when the game freezes, we get a message at the top of the screen that says "address error" or "illegal instruction". This happens a lot if you bump your game console the wrong way too. 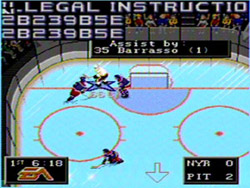 02. Skaters Become "Out Of Control"

This happens mostly when a player has just been checked into the boards. When he gets back up and starts skating, he suddenly can skate A LOT faster than he is suppose to. If you skate with the "out of control" player fast enough, he sometimes can bounce off of an invisible wall, and skate the reverse direction. Happens until a whistle stops play.

Sometimes when you try to pass to a player for a one-timer, the skater receiving the pass "freezes" and doesn't move and doesn't shoot the puck. The puck usually goes right past the player.

04. Skaters/Goalies Go Physically Through Other Players

Forget Physics. What we mean here is skaters on the ice will sometimes actually skate right through another player's space as if they were a ghost. This happens for skaters and goalies. Players can also get stuck in each other in the same manner.

05. Skater Can Get Up Quick on a One-Timer

Sometimes when you pass to one of your teammates for a one-timer while he was down, he can get up instantly to shoot the one-timer.

This is when you shoot a one-timer and the player shoots the puck twice, but the player's stick doesn't move on the second attempt. We've seen a player do a "triple shot" as well.

07. Goalie Changes Into A Skater

The goalie on the ice turns into a skater during the game. He doesn't start skating around, but he just has the animation and look of a player. Happens until a whistle stops play. The goalie can also briefly appear as a player if he bodychecks a player into the boards. He does the crosscheck animation.

Very rarely, the goalie will disappear until the play stops. You will usually just see his "star" on the ice, but no goalie animation above it. At the next faceoff he is back.

Also very rare, a player on the ice will disappear until play has stopped, seeing only his "star" on the ice. At the next faceoff he is back.

10. Player Mirrored On The Other Side Of The Ice

This has only happened 2 or 3 times between our little NHL94 community. What happens is, at the beginning of a faceoff, one of the players on the ice is a mirror image of what he's suppose to look like. He can still carry the puck and shoot, just looks like he's skating upside down on the other side of the ice. Pat Lafontaine was one of the lucky players to do this.

11. Puck Leaves Screen And Comes Back

What we mean by this is, sometimes when you shoot the puck out of the rink, it leaves the ice, but then floats across the screen from another location on the screen.

12. Organ Music Gets Messed Up

Sometimes the organ music playing will suddenly sound like a xylophone instead of the normal organ sound. This seems to happen when certain audio clips overlap each other.

When passing the puck with either the goalie or a skater, sometimes the pass is extremely fast and bounces around the boards. At times this can also be a way to score a "pass goal".

Not necessarily a bug in the game, but it is funny. Sometimes when you pass the puck straight at the opposing team's goalie, it goes right though his legs and in the net. You can actually shoot the puck using the pass button on a few other angles as well. Hard to master this technique.

For the Genesis and CD versions of the game, there is a record holders screen that keeps your personal win-loss-tie, goals, and saves records. Sometimes this screen gets messed up and shows strange characters in the win-loss-tie column. 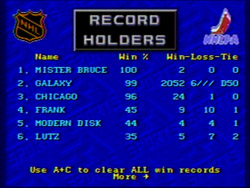 16. Goalie Scores But Gets No Credit

When the goalie scores a goal (yes it happens), they show it in the goal score text box that he scored, but it doesn't come up in the player stats. It also says he scored the goal in the scoring summary screen. It ends up being credited as a goal against and a shot against.

The goal nets in the game seem to have a trampoline effect when the puck hits the top of them. The pucks hits the net and then bounces off of them like a trampoline. Again, forget physics.

This is a phrase we give to when you check a player and he makes the noise that he fell, but he's still standing. The computer players are famous for this.

20. Instant Replay Goes Into A Freak-Out

Sometimes when you goto the instant replay in the game, it either freezes the game or creates weird animations and noises to start happening. This can be quite entertaining and you can sometimes return to the game after pressing the buttons for several seconds without losing your game.

21. Board Check On Open Ice

In the Sega CD version of the game, you can board-check players on open ice, and sometimes they go sliding across the ice. This tends to happen around the faceoff circles near the goalie.

This happened to us once on the Sega CD version. Basically there was a whistle, play stopped, player took a shot at the empty net after the play, and it went in the goal and counted. You may want to watch it a few times in a row because it's hard to follow.

23. Star On The Goalie You Can't Control

Sometimes during the game, your star goes on the goalie, but you can't control the goalie. You just have to wait until the play stops or the goalie gets the puck to regain control.

24. Computer Takes Over Your Puck Carrier

If you played the game enough, you know what we're talking about here. During the middle of a play, occasionally the computer becomes the player on your team with the puck, and your his "teammate". This usually happens for only a few seconds but will always happen at the worst times.

25. Penalty Shot After Game Is Over

If there's a case where someone drew a penalty shot, but then the game was over, the 3 stars of the game come up on the screen, and then you still get to take that penalty shot.

If your opponent gets a penalty shot, and you change your goalie right before he takes the shot, the penalty shot doesn't happen.

Sometimes, when you complete a one-timer and score a goal, the assist guy gets 2 assists for that goal, or sometimes doesn't even get the assist at all. 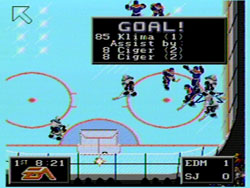 Every so often, the goalie will break apart into pieces after a goal has been scored. We've only seen this in the Sega CD version so far. 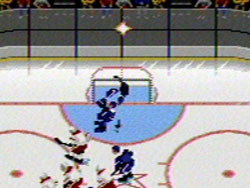 This has only happened once, and it was one of the most insane things we've ever seen happen in the game as far as bugs go. At the end of a game, 12 goalies actually skated on the ice from both teams (Buffalo and Dallas). We have 3 videos of this that you can view in the videos section.

This is when a skater comes in on the goalie, and when he shoots, the puck goes straight up into the air is if it were shot at the ceiling. This usually happens when the player shoots the puck too late and he's a little behind the goalie already. 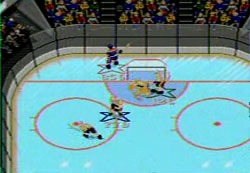 I personally have not seen this one yet, but several '94 players have all mentioned this one. Sounds like a fun time. From what guys have said, he's got all the highest ratings while wearing jersey number 0, and once you score with him the game freezes and you lose all your records.

The game actually allows goals scored at 0:00 left in a period as shown above. In this case, it was the determining goal. Too bad there's no video review upstairs. 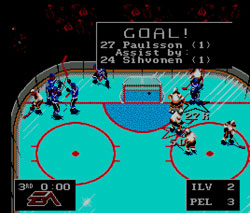 This is a rare bug where the goalie animations are actually mirrored on the ice until play stops. Then he will appear back to normal. This also happens to the skaters as mentioned above. 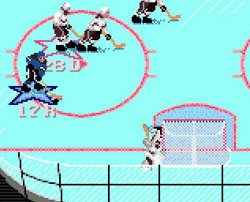